Benicia Unified is excited to announce our additions to the District Administrative staff.

Vanessa Fortney is joining us as the new Vice Principal at Benicia Middle School. Ms. Fortney earned her Bachelors of Arts degree in Spanish and International Studies and her Teaching Credential from St. Mary’s College Moraga. She also earned her Masters and admin credentials at the University of California Berkeley in the Principal Leadership Program. Vanessa has worked in Solano County for almost ten years in various teaching capacities. Ms. Fortney is very excited to meet everyone and get to know the Benicia Community.

Yadira Zapata joins us as the new Vice Principal at Benicia High School. Yadira received her Bachelor of Arts in Spanish Literature, with a Minor in Latin American Studies from UC Davis, where she taught Spanish in after-school programs. Yadira then went on to earn her Master of Arts in Teaching from St. Mary´s College of California, where she also received her Single Subject Credential. Yadira is also credentialed in Career Technical Education in Education, Child Development, and Family Services. Ms. Zapata most currently worked at Alhambra High School and is a visiting WASC committee member. She is an advocate for equitable education and is excited to join the BHS team.

Kimberly Lewis will take over the role of Liberty High School Principal. In 1997, she graduated from Sonoma State with both a bachelors and teaching credential.  Ms. Lewis then served at the Vallejo City Unified School District for 15 years teaching at Solano Middle School in all grade levels of History and 6th grade English.   She also worked at the District and County levels mentoring teachers and launching programs that promote 21st-century skills. In 2009, Ms. Lewis received her Administrative Credential and masters in Educational Leadership from Cal State East Bay.  For the past four years, she has served as Vice Principal at Solano Middle School in Vallejo Unified. Ms. Lewis looks forward to working together as a team with our staff and parents and is committed to helping each student achieve their very best.

The Governing Board and Superintendent enthusiastically welcome these new administrators. 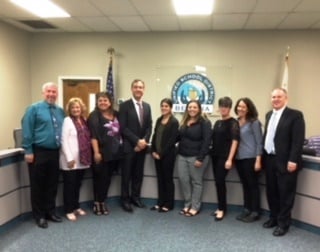